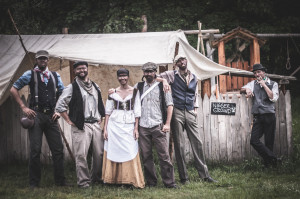 Ilustrational photo. For this run we will use black scarfs and a black line under one eye instead of face paint to represent freedmen.

The diverse group of black workers consists of former slaves, convicts, and soldiers. Some of them ended at the railroad because otherwise they’d starve, others know that if they escaped they would be punished by bounty on their heads and probably death. They have much lower wages than everyone else and despite the North’s victory much fewer rights. On the other hand they are the hardest workers and they hang together. It is a question how fast the construction would advance if it weren’t for them. The characters in this group have it a bit more difficult and have to put up with a lot from the others. But they also have someone to lean on to when they need and they’re included in all main plots.

A black man who fought on the side of the Union in the Negro regiment, led amongst others also by Sgt. Larry Griggs. Since Elam Ferguson, who used to lead the blacks in Hell on Wheels, started to be more interested in his own game, he’s been basically a leader and a father figure for the others. He would like to ensure a better position for the blacks at the railroad, because he thinks that being the best workers they deserve it. They used to be best friends with Elam, but now they became estranged and there is definite tension between them. The character is good for outgoing players, because he will be very often representing the blacks and try to improve their lot and make them safe.

A woman who provides support for the freedmen group – she cooks for them, washes their clothes, and takes care of other things. She’s young and quite pretty and so it’s no wonder that some blacks are interested in her. And actually… not only blacks. She is very energetic and very flexible. She can be wild and gentle, firm and compliant, and she can even take up a gun when it’s needed. She was supposed to be hanged for murdering her master, but Durant got the sentence suspended and mitigated to forced labour for life. If she commits any other crime, she will be immediately taken by Union soldiers and executed. A character good for active players who don’t mind male attention. The character deals with her path to freedom, a romantic storyline and relationships to other freedmen.

A mulatto – split between two worlds, neither white nor black. He managed to win people’s respect in town, to rise from the position of black labourer, and to learn how to shoot. Right now he works for Durant, taking care of his dirty business. But he also lost the freedmen’s friendship, because, though they all respect him and envy him what he was able to do, they see him as a bighead and whites’ servant.  This puts him in a difficult situation without friends or any people he could trust. He’s in love with a former prostitute Eva. However, she married Mr. Tool two years ago, because he, unlike Elam, was willing to settle down with her. Elam still loves her, but he’s not sure if he’s willing to sacrifice his freedom for her – it’s the last thing he has left.

He was born a free man, but in his youth he was kidnapped and sold in the South as a runaway slave. He was forced to be a labourer and only the war brought him freedom. But he didn’t enjoy it for long. He was convicted for a crime he did not committ and sold for two years of forced labour to the railroad – into a from of slavery that didn’t end even after the North’s victory. Jamai does not want to suffer from whims of fate anymore. He is not afraid to speak his mind to anybody and fight when it’s necessary. He strongly believes that blacks must fight for a better place in the society and he may be even more of a racist than some white people. The character is very quarrelsome, he will deal with the motives of revenge, freedom and the blacks’ position in the society

Sam is a former soldier from the Negro regiment where he fought side by side with Abe Psalms. The war brought him freedom from slavery, but that certainly doesn’t mean that it made it easier for him to make a living. He had to accept an inferior job serving a rich lady, Cornelia Darling, who just came to Durantown a few days ago and took him with her. At first the other freedmen treated him with contempt because of his job, but he managed to win their hearts by his cheerful and friendly nature. However, not all of them like the way he looks at Cynthia. A character about search for freedom and acceptance, about fitting in a group and the conflicts related to that.

A black man and a pretty good friend of Elam Ferguson for whom he still holds some admiration and keeps provoking him to be more active, since William is quite the idealist and dreamer. He’s constantly trying to push the boundaries of what blacks are allowed to do further and he often gets a thrashing for that. He does not fight back and he says that one day the whites will get tired of beating him and that’s when he’ll get his way. William believes that the future of black folk holds a new and better life for them – which has often been a matter of discussion between him and Jamai. He is quite spiritual, trying to find his path to faith and religion. A character for an active player who wants to play an idealist role who will primarily be concerned with the freedmen’s future, but also with a romantic storyline and the questions of faith.