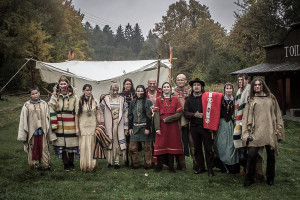 Only a few of them travel and work with Hell on Wheels and the society disdains them almost as much as the freedmen. Whenever there is any incident with the wild Cheyenne, they are the ones who gets blamed by the others. Although they have been baptised and accepted civilization. Although some of them do not come from the Cheyenne tribe at all. Their stories are very personal and often very tragic –  as is the fate of the native population of North America in general.

An Indian who converted to Christianity and tried to accept white education and social conventions. He helps the local reverend in church, but despite his decision to accept the whites’ faith he is not completely sure and he’s torn between Indian traditions and white culture. He’s started having problems with Ruth who he used to fancy. He also tries to save Reverend Cole who’s been taking up drinking more and more recently and who stopped serving as a priest. The character of Joseph offers a lot of space for inner experience. He deals with a failing relationship, as well as his split between the old and new culture and between the old and new religion. He’s one of the few people in town who interact with the Indians living in a nearby village.

An Indian from the Huron tribe. She’s happily married to Jacob Wheeler who saved her from white people who wanted to sell her. She was brought up with respect to Indian values and the nature, but she’s also fascinated by the developed white culture. She has experience with healing and so she helps Doctor Whitehead with caring for the wounded. She’s very wise for her age and always willing to give good advice. She also cautiously tries to be involved in the conflict with Indians, but that has made her enemies. A character for a player interested in a quite mentally stable and wise character, whose origin, as well as some people’s hatred are starting to creep up on her.

The daughter of the Cheyenne chief (of the tribe that has camp close to the town), called Rainee by the white people. Her father gave her as a wife to a merchant, James Lebeck, to ensure an alliance with the white people. But Rainee is not happy, she still has the soul of an Indian and she doesn’t understand the white mentality. Despite that she is obedient, does what is asked from her and expects to start a family with her husband soon. But she’s slowly realizing that it might not be that easy… This unconventional character is for a player who’s not afraid of  identifying with a character that doesn’t understand the world and customs around her, but is discovering them and trying to comprehend them. She will also have the chance to interact with her tribe in the village nearby. A story of a girl who is forced to stand on a different side than her heart. She will be faced with an uneasy decision. This character is based on a strong inner experience which determines her relationships and the actions she must take.